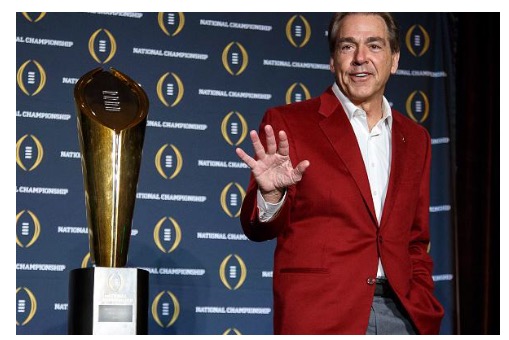 I got enemies, got a lotta enemies; Got a lotta people tryna drain me of my energy – Drake

Tonight marks the official ending of the college football season. Coach Nick Saban will be coaching his team to their possible third National Title in five seasons. I felt this #mcm was only proper for the occasion.

As with the #mcm feature, some may revere this man, some may loathe him. Regardless of what side you fall on, we are looking at the modern day contender to challenge the former great Alabama HC Bear Bryant. Coach Saban already possesses a higher winning percentage than the famed coach, and if he wins tonight will be tied with Coach Bryant, at six National Titles.

Coach Saban is a leader among men. He’s not a businessman. He’s a business, man.

Winning, or winking as auto correct wanted me to type, takes no time off. Saban knows how to win and wink, keeping the Tide rolling under his control.

He’s got one thing on his mind… It’s football. All.The.Time

The Sabanator was born 10/31/51. How fitting that this man was born on Halloween? Providing more ammo for his haters dubbing him Satan.

Saban has taken after his well-known mentor well, Bill Belichick. He’s intensely focused, studies and prepares for any little details that could trip him up, and wears the perma-scowl well.

Saban is known for his defense. He played as a defensive back himself while at Kent State. As a natural defender, he’s crafted his well-known Cover 3 from foreseeing the football trend progress season-over-season, to pass-heavy offenses. That’s why The Sabonator is so good at coaching his defenders to do this…

Nick has a few sayings. Be where your feet are. Do your job. Dominate your box. Keep chopping wood. Buy into The Process.

The term The Process is thrown around football more often than a post route. Current and former players have been quoted that Coach Saban’s Process is not exactly defined. What Nick has been known to say is, he learned to embrace, and develop a love for the “doing”, versus focusing on the outrageous goals he has, and his teams to achieve. This is The Process. The grind, the day in and day out preparation.

Don’t let it fool you that Nick is a country boy. Recall the scene in the Blind Side, where Saban made his film cameo? He commented on the recruit’s mothers drapes. Classic Saban. Part of his Process also stems from looking like success on and off the field.

What does Saban hate? Losing. He’s been quoted to say he’s absolutely miserable after a loss. This is why he’s known to be hard on his assistants, making a few enemies, just like the man who used to be his right hand man that Lame Kiffin, and wanting to review film for hours, whether the team won or lost to prepare. 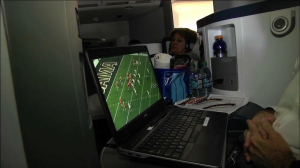 What’s the saying, the Devil is in the Details?